ouis VI was born in around 1081 to Philippe I, king of France and Bertha of Holland. He was brought up on physical exercise and was a great eater and drinker hence his nickname. His youth was spent fighting, firstly the Normans in Vexin and then resolving disputes in Chartres and Agincourt. When he became king in 1108 he was mature and ready to rule. The monk Suger, who designed the basilica of St. Denis, was a great supporter of Louis and documented his life in great detail.

Louis' most important act was the defeat of the joint attack from England and Emperor Henry V in 1124. Louis was saved by the fast action of the vassals who organised huge numbers of men to move against the threat. Emperor Henry V actually turned back before engaging the French.

Louis arranged the marriage of Eleanor of Aquitaine to his son, the future Louis VII, in an attempt to increase the territories his family could own. The Duke of Aquitaine possessed a quarter of France. Louis died in 1137 shortly after arranging the marriage and was succeeded by his son Louis. 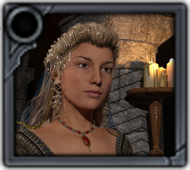 Louis VI, the Fat, became king of France, upon the death of his father Philippe I. ¹

Louis VI of France, with the help of his vassals, mobilized a huge number of men to avert a joint invasion from England and the Emperor Henry V. ¹

Murder of the Count of Flanders

Charles the Good, Count of Flanders, was murdered as he prayed in the church of Saint-Donatien at Bruges. His murder came as a huge shock and, as he did not have a son to inherit his title, the murder started a period of conflict in the region. Several claiments came forward including William of Ypres, Thierry of Alsace and William Clito. William Clito's claim was backed by Louis VI. ¹

Coronation of Philip of France

Following the Capetian tradition of the French Kings, King Louis VI of France had his eldest son Philip of France crowned at Rheims Cathedral. Philip then became joint ruler of France. ¹

King Stephen sailed to Normandy to confront Geoffrey Plantagenet, count of Anjou and the Angevins who were attacking the southern areas of Normandy. Although Stephen had some success he was not able to deal fully with the count. Stephen did come to an agreement with the French King Louis VI and Eustace, Stephen's son, paid homage to the French king for Normandy. ¹

The French king died. He was succeeded by his son Louis VII.

King Louis VII was crowned king of France, a few months after the death of his father Louis VI. ¹