orn in around 1035, Odo was the son of Herleva and Herluin de Conteville, brother of Robert, Count of Mortain. Odo's mother Herleva was the mother of William the Conqueror. Herleva married Herluin after the death of William's father Robert I (Duke of Normandy). Odo was to rule England for William after 1066 when William was in Normandy. Odo was given the bishopric of Bayeux by his brother William, a political move, as Odo was below the required age of 30. In 1067 Odo became William's deputy in England, assisted by William Fitz Osbern, until Osbern's death in 1071. Odo also became the Earl of Kent and his wealth and land became considerable.

Odo commissioned the Bayeux Tapestry which was first shown at the dedication of his new cathedral on July 14th, 1077. The Tapestry shows the three brothers, William, Odo and Robert before the battle of Hastings and Odo is talking while William is listening possibly showing Odo as the architect of the battle plans.

Odo was imprisoned by William in 1083. Odo was planning to become the Pope. He had bought a palace in Rome and had bribed several Romans, recruiting many knights to fight his cause. William intervened as Odo prepared to leave England and brought Odo before a council. The council was slow to convict Odo and so William had Odo taken to Rouen and imprisoned there. Odo was released on the death of William in 1087 and attended the funeral. 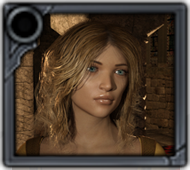 Odo,the Bishop or Bayeux, became William the Conqueror's deputy in England and was assisted by William Fitz Osbern until Osbern's death in 1071. Odo also became the Earl of Kent and his wealth and land became considerable.

The Bayeux Tapestry is first shown at the dedication of Odo's cathedral.