iddleham Castle is a large stone-built castle and located in the North Riding of Yorkshire. The first castle on the site or nearby was constructed shortly after the Conquest of England by Alan, the Earl of Richmond or by one of Alan's brothers, Ribald. At this time the construction would have been of a motte and bailey type of castle. A hundred years later in around 1170 or 1190, the castle was remodelled by Robert Fitzralf (Fitz-Ranulf) who built the large stone keep. Later, the Neville family bought the castle and it became the main residence of Richard Neville, Earl of Warwick the 'Kingmaker'. Richard (III), the Duke of Gloucester, also spent a lot of time at the castle. The walls that surround the castle form a parallelogram meausring some 240 by 180 feet. At the corners of this curtain walls are four strong towers, three being square and one being semi-circular. The east and west curtain walls also have towers at their centres. The Keep is divided into two halves down it's length by a a large dividing wall, common in keeps built at this time. It had two floors and possibly a third that was constructed at a later date. 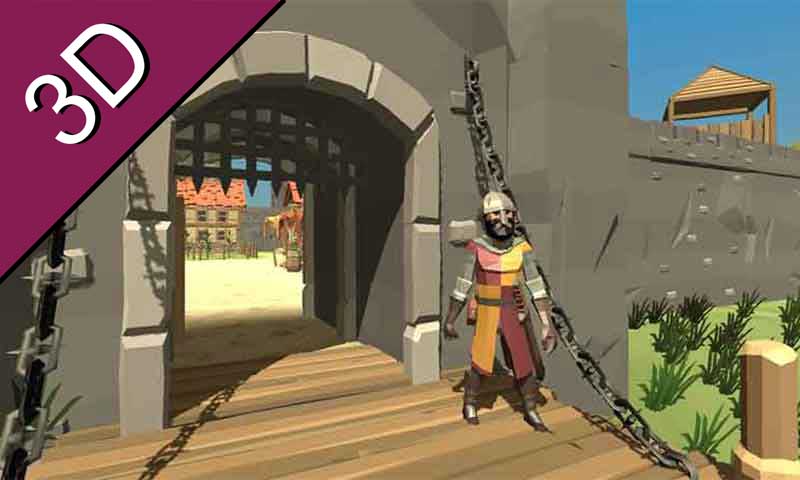 Middleham Castle is a large stone-built castle and located in the North Riding of Yorkshire. The first castle on the site or nearby was constructed shortly after the Conquest of England by Alan, the Earl of Richmond or by one of Alan's brothers, Ribald. At this time the construction would have been of a motte and bailey type of castle. A hundred years later in around 1170 or 1190, the castle was remodelled by Robert Fitzralf (Fitz-Ranulf) who built the large stone keep.

This plan shows the layout of the ground floor of the keep at Middleham Castle. Down the length of the keep is a cross-wall dividing the building into two. On the lower level can be found the storeroom and the kitchens with one or more wells. The roof of this basement level was vaulted in stone. The only access to this level was by a spiral staircase in the south-east corner. The staircase is shown in the bottom left of the diagram. 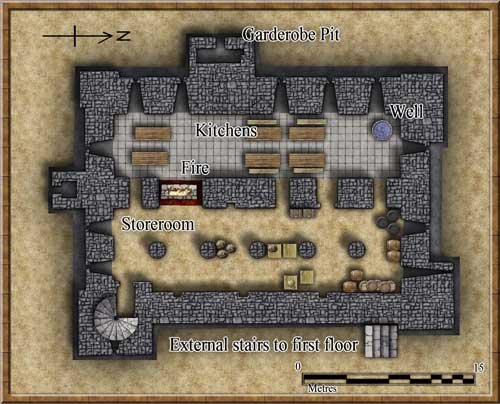 Access to the keep was via a long flight of stairs running along the east side of the building up to the first floor. A wall enclosed the stairs but they were open to the sky so that visitors could be monitored, and attacked if necessary, from above. Several doors and guards stood between the foot of the stairs and an anteroom where guests were greeted.

The Great Hall was where the banquets, meetings and court hearings took place. At the southern end of the hall are two passageways, one leading to a toilet and the other to stairs leading down to the basement. At the north end is a passage to a chapel built intothe north-east tower and a passage through the centre wall to the western half of the keep. 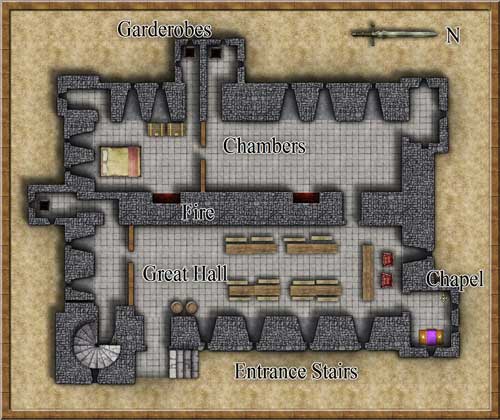 Middleham Castle in Yorkshire could have been built at this time.

Richard becomes Lord of the North

Richard (III) was given the task of bringing the north of the country under control. The conflicts between the Lancastrians and Yorkists over the previous few years had left the northern counties without any effective rulers resulting in lawlessness and unopposed Scottish raids. Richard was given the lands that the Earl of Warwick had previously possessed and he made his base at Middleham Castle.

King Richard III married Anne the widow of Edward Prince of Wales who died in 1471 at the Battle of Tewkesbury. Anne was the daughter of Richard Neville, Earl of Warwick the 'Kingmaker', and had grown up with Richard III at Middleham Castle when he had been placed their for his education. Marrying Anne gave Richard III rights to the Earl of Warwick's northern estates.

Birth of Edward, Prince of Wales

Edward, the son of Richard III and Anne Neville was born at Middleham Castle.

Richard's only son died at Middleham Castle aged only eight. Anne was unable to have any more children and she would die in the following year. This left Richard with the problem of who should succeed him after his death.