Abbey: A monastic community. Abbeys belonged to particular orders, such as the Cistercians.
Abbot: (m.) Person in charge of an Abbey.
Benedictine: Order of monks founded by St. Benedict. Followed the Benedictine Rule.
Cell: A monastic dependency of a religious house.
Daughter House: Foundation of an abbey by monks from another abbey. Initial community consisted of 13 monks, one of which was the group leader.
Monk: A man who has taken vows and joined a religious community.

Orders
Please note that the TimeRef website is currently being redesigned.

Until the end of the eleventh century the monasteries in England mostly belonged to the Benedictine Order following the Rule of St. Benedict, but in the twelfth century new monasteries were being built that followed new Orders. The main reason for this was that some believed the the old monasteries were becoming too rich and not behaving as St. Benedict had wanted, so they returned to a stricter version of the Order.

The Benedictines or Black Monks

The Benedictines otherwise known as the Black Monks were not an Order in the same respect as those detailed below. They were named after St. Benedict who devised a set of rules for the monks to follow. Benedictine abbeys and monasteries all followed the Rule of St. Benedict and were generally self contained and were not dependant on a mother house. Known originally as the Black Monks because they wore black cloaks they became known as Benedictines later on when new Orders began to appear to distingish them from the others. Benedictine monasteries were common across both England and Normandy at the time of William the Conqueror. William founded the Benedictine Battle Abbey on the site of the Battle of Hastings in 1067.

Benedictine abbeys were known for their books and artwork. They kept important libraries where the books were copied and illustrated. The books held a chronicle of information relating to the history of both the monasteries and the nation as a whole.

Over time the Benedictines became rich and involved in the world around them. Some monks within the ranks believed the Rule of St. Benedict was not being followed and wanted to return to the simpler life that Benedict had originally envisaged. So new Orders evolved, named after the first house that was build. The Cluniacs came from Cluny, and the Cistercians from Citeaux.

The Cluniac Order was founded by a Benedictine monk called Odo who believed that the strict rule of St. Benedict was not being followed. He founded the abbey of Cluny in 910. In this order the daughter houses were all dependant on Cluny itself for their funds and any money the daughter house received had to be sent back to Cluny. When Cluny started using its funds to increase its own grandeur its daughter houses suffered and popularity of the order began to wane. Monks in this Order dedicated so much time to prayer that they had to employ workers to tend the fields and gardens. In England the order set up many proiries the first and most important was in Lewes in the south. Bermondsey, the second, was finally elevated to an Abbey in 1399. Other priories include those at Wenlock, Castle Acre, Lenton, Montacute and Thetford to name a few.

The Cluniac priories were classed as 'alien priories' which meant that they were dependant on a foreign mother house; in this case Cluny. During the Hundred Years War, when the English and French were fighting, these alien priories were seen as a security risk. To help avoid an invasion from France a restriction was put on the inhabitants of alien priories preventing them living within 13 miles of the coast. Alien priories sent the money raised in England back to France which was not popular. In 1414 the alien priories were confiscated by Henry V and the English Crown. Many were taken over by other religious orders. 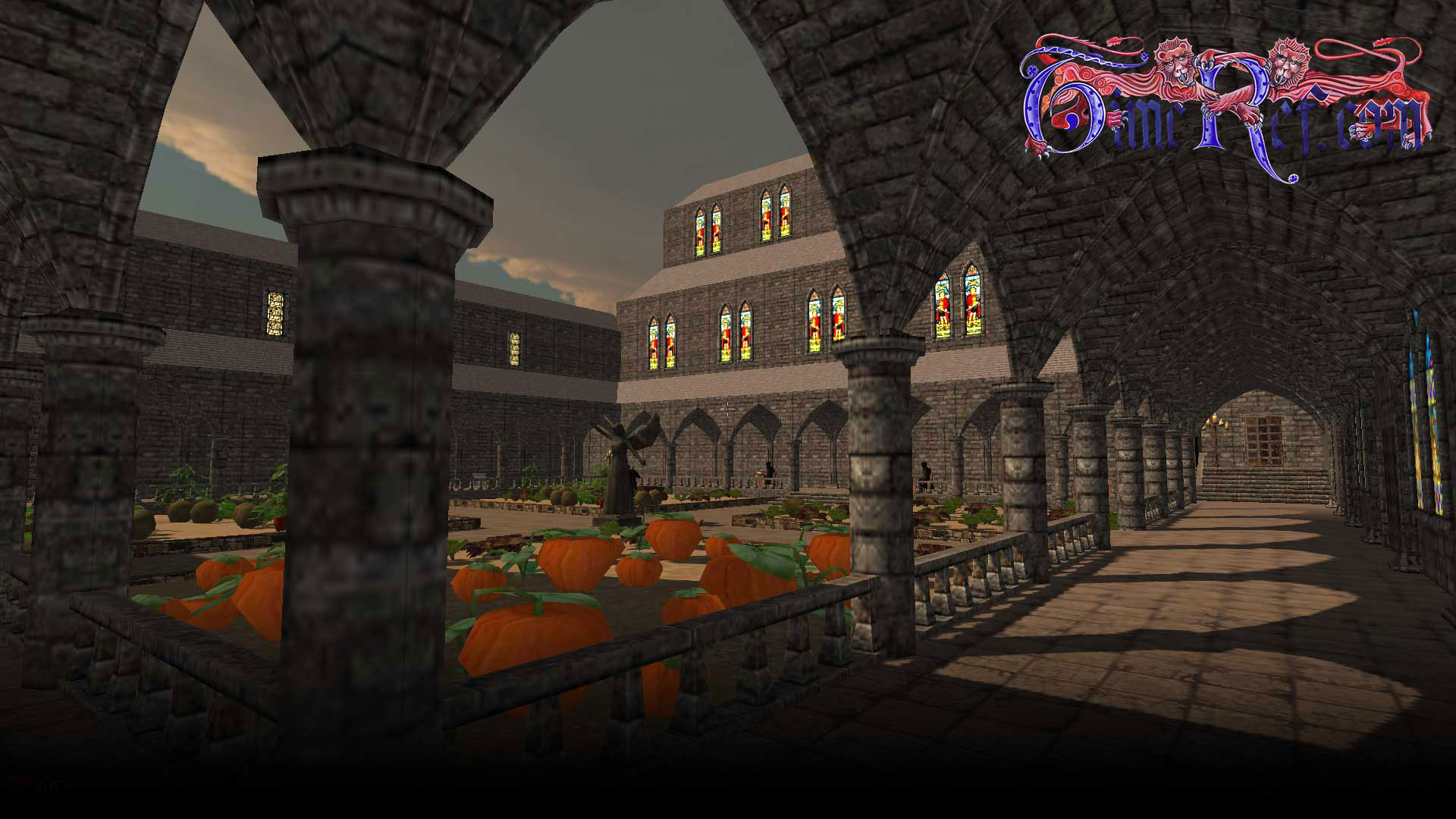 The Carthusians were founded in 1084 by Saint Bruno at Grande Chartreuse (or La Cartreause) and were descended from the Benedictines. In England their houses were known as Charter-houses. The Rule that these monks followed was possibly the most strict of all the orders. Being a Carthusian monk meant that the ideal of leaving the world behind when entering a monastery was taken literally. Each monk lived in solitude in a small cell where he did his own cooking and slept. He had a small area of garden in which to grow food and only meet his fellow monks once a week. As the life was so strict and the order did not communicate with the outside world the number of abbeys remained less than ten in number. Only two Carthusian houses were founded before the middle of the fourteenth century, those being Wilton and Nottinghamshire in around 1180 and Hinton and Somerset in around 1227.

The Cistercians or White Monks (Founded 1098)

The first members of the Cistercian Order were Benedictine monks living at the abbey at Molesme who were unhappy that the rule of St. Benedict was not being followed. In 1098 the monks, lead by Robert, the Abbot of Molesme, left and built a wooden monastery at Citeaux where they chose to live an extremely hard life. The Cistercians refused the riches that the Benedictines accepted and did not have servants. Back at Molesme the monks were unhappy that their Abbot had left and aproached the Pope for help. The Pope agreed and Robert was forced to return. He was replaced first by Alberic (1099-1109), who previously had been the prior at Moleme, and then after Alberic's death by Stephen Harding (1109-1134). Stephen Harding was an Englishman born at Sherborne in Dorset and one of the original founding monks. As the life the monks choose was difficult it was hard to find new recruits or get donations from rich benefactors, but before Stephen died he had transformed a very poor monastery into the centre of one of the most powerful monastic Orders of the time. The first daughter house, La Ferte, was created in 1113 and in the same year Bernard of Fontaines.

In general the Cistercians built their monasteries in remote places far from civilisation and refused to accept donations apart from the land on which they built. The Benedictines on the other hand tended to build near towns. The Cistercians became expert farmers, farming huge areas of land and raised large flocks of sheep.

Although already popular, the success of the Cistercians increased with the arrival of Bernard of Fontaines or St. Bernard of Clairvaux, as he is now known, was very persuasive. He became the Abbot of Clairvaux in 1115 and by the time that he died in 1153 there were up to 340 Cistercian abbeys in Europe. From Citeaux the Cistercians spread across France and then in 1128 moved across the Channel to create its first daughter abbey in Britain at Waverley in Surrey. During the period of civil war (1135 - 1153) known as the anarchy between King Stephen and Matilda, the daughter of Henry I, the Cistercians greatly increased their presence in Britain.

All Cistercian abbeys were descended from the mother church at Citeaux, but unlike Cluny and the Cluniac Order, the Cistercian daughter houses were more independent and were administered by their own abbots. There were far too many daughter houses for Citeaux to administer alone. For a diagram showing the relationship between the abbeys click here: -

The Augustinians were not monks like the Benedictines or Cistercians but were canons. Canons were priests who lived in communities such as Cathedrals or collegiate churches. These canons were not bound by the strict rules like the monks but followed the rule of St. Augustine. St. Augustine was a bishop at Hippo, a city in Algeria, northern Africa. Here in around the year 400 A.D. he wrote many books on many subjects. One of these books gave directions on how a monastic community should be run and this was the basis for the Augustinians rule. The Augustinian canons wore black robes and were known as the Black Canons.

The Gilbertine order was founded in England at Sempringham in Lincolnshire by St. Gilbert who is also known as Gilbert of Sempringham. The order allowed both men (regular canons) and women (nuns) to join its ranks. Several daughter houses were created mainly in the north-east and east of England but the number was small compared to the larger Cistercian order. When the order ran into funding problems Gilbert approached the Cistercian order for help but was refused because of the women. King Henry II gave the order the right not to pay taxes to help it survive.

Like monks, friars took the usual vows associated with religious orders, but unlike monks, friars travelled around the country and preached to those who would not normally be reached by other means. While they travelled they stayed at houses belonging to the order that were located in the towns they visited.

The Dominican Order was founded in 1216 by St. Dominic. An important aspect of this Order is that of learning and several houses were founded in cities with links to universities. A Dominican house was founded in Oxford in 1221.

Abbey: A monastic community. Abbeys belonged to particular orders, such as the Cistercians.
Abbot: (m.) Person in charge of an Abbey.
Benedictine: Order of monks founded by St. Benedict. Followed the Benedictine Rule.
Cell: A monastic dependency of a religious house.
Daughter House: Foundation of an abbey by monks from another abbey. Initial community consisted of 13 monks, one of which was the group leader.
Monk: A man who has taken vows and joined a religious community.