adwig was the King of England from 955 until his death in 959. From 957 his rule was restricted to Wessex, the area sorth of the River Thames, after a dispute with his younger brother, Edgar. Eadwig took the throne at the age of fifteen or sixteen after the death of Eadred, his uncle, who had died without having any children. The two brothers were too young to rule unaided and it is possible that there were people who tried to influence which brother became king and to control them. After Eadwig became king several people fell from favour including Bishop Dunstan who was sent into exile. The story goes that the king ran into trouble with Bishop Dunstan who was to become Archbishop of Canterbury. Dunstan had caught Eadwig and Aelgifu, the king's future wife, together before they were married and at a time when they should have been attending a meeting with many dignitaries and officials of the kingdom discussing state business. Whether this is true or just a story invented to hide the truth about Dunstan's opposition to the king is not known.Eadwig's control of the country came to and end after for two years when his younger brother and supporters forced the kingdom to be split into two. Edgar took control of the lands north of the Thames, Mercia and Northumbria. while Eadwig controlled Wessex, the lands to the south. When Eadwig died in October of 959, Edgar was able to unite the country under his rule. 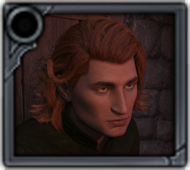