ichard was the father of two Kings of England; Edward IV and Richard III. Richard was descended from Edward III via his son Edmund of Langley, but also from the daughter of Lionel Duke of Clarence, another son of Edward III. (See a family tree to understand this.) In 1415 Richard became an orphan after his father was executed for plotting against the king and the house of Lancaster. He was sent to Raby Castle to be brought up in the household of Ralph Neville, the first Earl of Westmorland. It was here that Richard grew up and met his future wife Cecily Neville, the Rose of Raby, to whom he was betrothed. Richard became the wealthiest land owner of his time having inherited estates from Edmund of Langley and the powerful estates of the Earl's of March from his mother Anne Mortimer. Ludlow Castle was used as his main residence. Richard married Cecily the daughter of Ralph Neville, 1st Earl of Westmorland, and Joan Beaufort, the daughter of John of Gaunt and Catherine Swynford.

Claim to the English throne

Elizabeth (of York, Duchess of Suffolk)

Descent of Richard duke of York 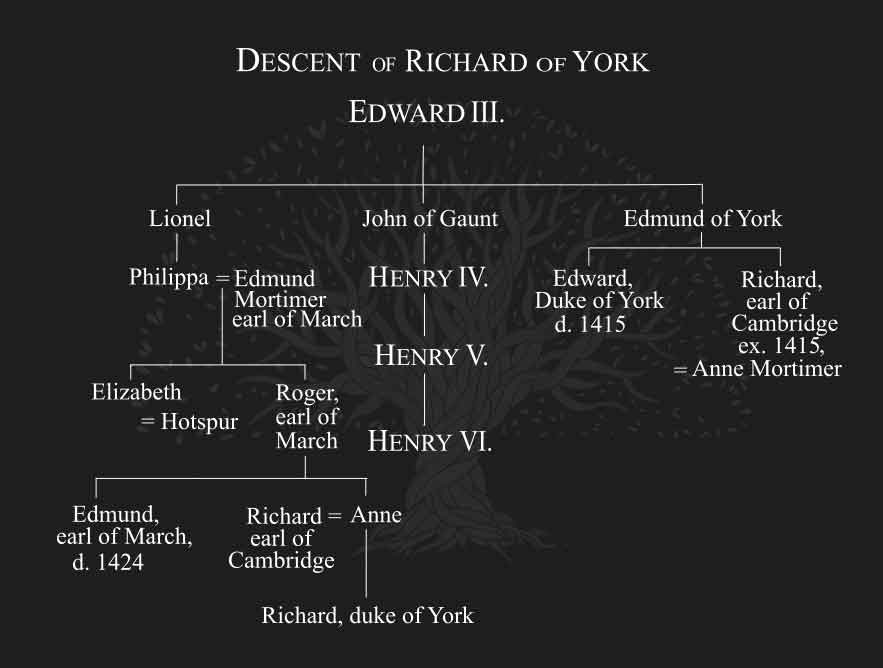 Birth of Richard of York

Richard, Duke of York, was born on the 21st of September. His father was Richard, Earl of Cambridge, and his mother was Anne Mortimer.

Marriage of Richard and Cecily

Richard, Duke of York, is appointed lieutenant-general in France by the king, Henry VI.

Richard, Duke of York was re-appointed lieutenant-general of France and Normandy. ¹

Duke of York in Normandy

Although Richard, Duke of York, had been appointed governor of France and Normandy he did not go until reports from Rouen in Normandy of French attacks persuaded him to do so. ¹

Edmund Beaufort was appointed lieutenant of France. Richard of York had wanted to be re-appointed to the position. Edmund and Richard became rivals in the battles of the Wars of the Roses. ¹

Richard, Duke of York, had previously been the Lieutenant of France and Normandy but this had expired and the title had gone to his rival Edmund Beaufort (later Duke of Somerset). Instead, Richard was appointed the title of Lieutenant of Ireland. ¹

As a possible heir to throne of England, Richard, Duke of York returned from Ireland where he had been placed as lieutenant by the Duke of Somerset who had possible aspirations of taking the throne for himself. Edmund Beaufort, the Duke of Somerset and his associates were being shown favouritism and Richard along with the Welsh land owners were finding it hard to retain the earnings they were making from their own estates. William Tresham, a supported of Richard's was murdered as he travelled to meet the Duke. At first Richard attempted to hide his intentions of overthrowing the king.

With William Oldhall, a supporter of Richard Duke of York, in the speaker's seat, Parliament was on the the Duke's side. It was agreed that those at the king's side should be arrested including the Duke of Somerset.

Support for Richard in Parliament

Thomas Young, the member of Parliament for Bristol stood up and declared that Richard, Duke of York's claim to the throne should be considered. Thomas Young was quickly arrested and locked up in the Tower of London.

The Duke of York writes to supporters in Norfolk asking for their support in an uprising against the King. ¹

The Duke of York gathered an army and marched on London intent on persuading King Henry to remove Somerset from power, The king took an army north to Northampton to prevent Yorkist supporters in the east joining York in the west. The king also sent word to the city of London to not allow York to enter, Learning that he was refused entry to the city the Duke of York continued south and crossed the the river Thames at Kingston. York moved his army to Dartford while the King Henry came back south to London. ¹

The Duke of York surrenders

The Queen had raised an army and with the king they confronted the Duke of York at Dartford. Outnumbered, York disbanded his army and surrendered. He was taken to London and later at St. Paul's Cathedral was forced to swear an oath saying he would not oppose King Henry. ¹

Richard, the future King of England, was born in Fotheringay Castle in Northamptonshire. His father was Richard Duke of York and his mother was Cecily Neville. Richard was their fourth son.

From August 1453 until the end of 1454, the mental health of King Henry VI was such that he was unable to conduct the day-to-day government of the country. The illness was some kind of mental condition possibly inherited from his grandfather Charles VI of France who also suffered from bouts of madness. What followed was a struggle for power and control of the English throne. Amongst the main rivals were Richard, Duke of York and Edmund Deaufort, the Duke of Somerset.

With support of the other barons Richard, Duke of York won over the unpopular Edmund Beaufort, the duke of Somerset. He had only kept his position of power with the support of the King and without that support all was lost. Somerset was arrested and sent to the Tower of London.

Richard, Duke of York made Protector

With the king unable to govern, the queen with the support of the powerful Neville Earls gave Richard, Duke of York the position of 'Protector of England'.

Henry returned to health and Richard, Duke of York was removed from the position of Protector.

A Parliament was held after the Battle of St. Albans to confirm the changes of appointment. Richard, Duke of York became protector for the second time. ¹

King Henry VI suffered another bout of mental illness. This time to last until February of the following year. ¹

Duke of York resigns as Protector

King Henry VI again came around from a bout of mental illness and Richard, Duke of York, was relieved from the position of Protector of the Realm. ¹

The Earl of Warwick arrived in England from Calais. He was welcomed in London before setting off north to meet up with the Duke of York. ¹

Led by Richard Earl of Salisbury the Yorkists in the north mobilised an army and headed south to meet the Duke of York at Ludlow. Salisbury was intercepted by a Lancastrian army led by Lord Audley at Blore Heath in Shropshire. The Lancastrians were the first to attack. Their first and second cavalry charges were repulsed and when the Lancastrian foot soldiers were also repulsed they turned and fled. In the battle Audley was killed and although two of Salisbury's sons were captured they were quickly released. The Yorkists had won this battle.

The Earl of Warwick with a force from Calais reached Ludlow and the combined army of the Yorkists attacked the King's army at Ludford Bridge near Ludlow. The men from Calais refused to fight their king and a weak Yorkist army was defeated. Richard Duke of York and his younger son escaped and fled to Ireland while Salisbury, Warwick and Edward of March (later Edward IV) fled to Calais.

With the Yorkists in control of the seas around the south coast of England, the Earl of Warwick was able to leave Calais and sail to Ireland where the Duke of York had taken refuge. There they planned their invasion of England and the defeat of the Lancastrians. ¹

Richard, Duke of York returned from Ireland to claim the throne of England as a direct descendant of Edward III. The Lords refused to abandon Henry VI and Parliament agreed he should remain King until his death after which Richard or his heir should become the next king of England.

Queen Margaret had been building an army in the North and started attacking Yorkist held settlements. Richard left London with a small army to deal with the Queen. He had underestimated the Lancastrians and at his castle at Sandal Richard was confronted by superior forces. Although Richard sent word to the Earl of March for assistance he didn't wait and attacked. The battle left Richard Duke of York and his son Earl of Rutland dead.